I wanted to compare the various containers, so I tried some open to the flame (cast iron servers, 1 terracotta cup) and some closed (2 clamshelled cups, 2 stacked ramekins) 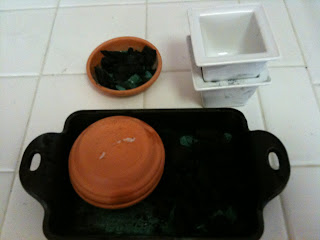 I put them in the bottom of the forge, and piled in the charcoal. 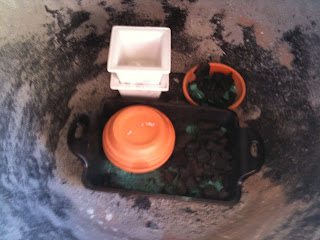 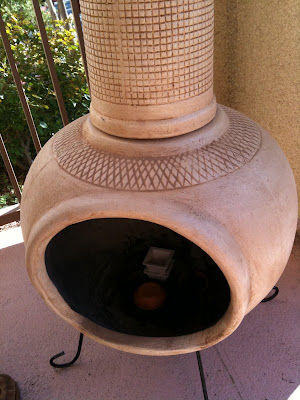 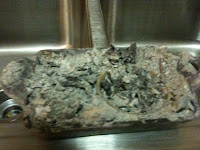 Each container had a mix of large chunks of broken malachite and ground charcoal. I lit the fire and started a'blowin. I reloaded the fuel several times, eventually using the entire bag of charcoal. Once the entire thing had burned down to a bit of ash and a few glowing coals, I extracted the various containers. The cast iron server looked like this. (the circle on the right is the open terracotta saucer) 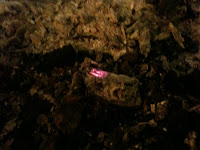 Safety tip: beware hidden coals... as I started to empty this (by hand, the cast iron was cool enough to touch) I found this guy hiding in the ash...

I decided that it must be partly red copper oxide (Cu2O) encased in black copper oxide (CuO), which looked a lot like little chunks of charcoal. This meant that I'd partially reduced the malachite, but didn't actually get to a liquid copper state. 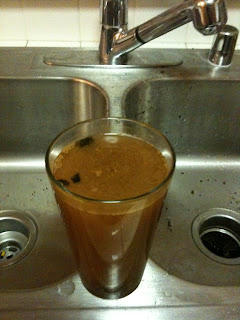 But now I was faced with a problem: I had copper oxide chunks and charcoal that both looked like small black brittle lumps. How could I separate them? After spending 5 minutes teasing them apart and sorting them visually (the charcoal always had striations in the surface) the "idea" light over my head started glowing weakly. Carbon floats, ash is partly soluble, and copper oxides are insoluble. Enter the sophisticated scientific apparatus known as "a glass of water": 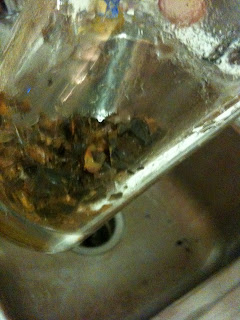 After fishing out the charcoal lumps from the froth, and draining and refilling the glass several times (being careful not to tip out any copper from the bottom) I ended up with the copper oxide "lode" at the bottom of the glass. The black lumps are not charcoal nibs, they're black-jacketed copper oxide.

Remembering my leftover "ash" from smelt #1, I emptied that into the glass as well. Presto, more copper. I hadn't made it vanish after all. 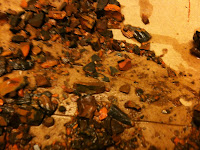 I emptied them onto a paper grocery bag to dry:


After examining them for a bit, and comping to the conclusion that the problem had been a overabundance of oxygen, I decided the next step was to put the oxides back into the forge, heat it up, and do my best to make sure that the fire was hot enough to reduce the oxide, and make sure that there was a dearth of oxygen in the containers.

Side note: The Revol ceramics unsurprisingly didn't hold up. Apparently it was too hot for them: the glaze on one cracked, and the other actually broke in the fire, presumably from exceeding its design parameters by 800-900 degrees. :)