Past efforts: Paleosmelting equipment for my apartment

I briefly considered going the "easy" route and buying a commercial small-scale gas-fired smelting furnace, but with my base goal of recreating the tech of the time, I decided to go a more simple route. My apartment complex allows barbecues on the patios, and I decided to get a small terracotta chiminea and burn some charcoal in it. Home Depot sells them, a little bigger than I had wanted, but they were in stock and I was wanted to get started, so I bought it. 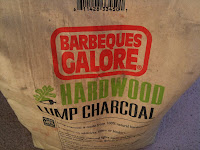 On the way home, I remembered (doh!) that I would need some lump charcoal to burn in it. I could use regular firewood, or briquettes, but lump charcoal was probably The Right Thing. Happily, Barbeques Galore had lump hardwood charcoal for sale at a reasonable price, and I bought a couple bags. Surprisingly, neither Home Depot nor the BBQ store sold bellows. A short length of copper pipe with a flange would do for a blowpipe until I could get a proper bellows.

So now I have the makings of a forge, but no ore. Sigh. I go off to the local rock shop and buy a half dozen nuggets of malachite for $3 each, and I'm on my way. It's not very economical, but at least I can get started.

I got the stuff home and unpacked it. (note to self: lugging a boxed chiminea from your car through your apartment to the patio counts as exercise!) Getting it all set up took the remainder of the afternoon.

Actual smelting would wait for tomorrow, but on a lark, I decided to see what would happen if I just took a flake of malachite and held it in the flame jet of a gas stove. It turns black and gets brittle, but that's about it. For the chemists in the crowd, I think it's partially decarbonizing the carbonate: (CuCO3 → CuO + CO2) but I can't be sure about that. Nevertheless, it was promising: I changed the raw mineral into something else.
Posted by Jeff Evarts at 12:44 AM