Lee Sauder and Skip Williams have a good page of iron smelting links at The Rockridge Bloomery. (Mel Brooks movie quotations aside)

The Early Mines Research Group has an ongoing smelting effort as well, check out the "experimental archeaology" and members-projects links.

It looks like a lot of different people are (or recently have been) interested in early metal smelting re-creation, and I would love it if whoever catches the bug next had an easier time finding resources than I did, so please: send me your references.
Posted by Jeff Evarts at 6:42 PM No comments:

Some other folks are thinking along the same lines here, and I wanted to put up some links to their work as well.

Tim Young at GeoArch has been running experiments and recording data for a succession of iron smelting efforts from 1998 through 2007.

See something else that needs to be on this list? Let me know!
Posted by Jeff Evarts at 6:10 PM No comments:

Faced with several smelting failures, I decided to apply one of the sacred tenets of practical engineering taught to me by my father: "When it won't work, cheat". I swapped out the clay forge for one made of loose-stacked firebricks, solving my spalling and insulation problems at a single blow. I was confident charcoal with forced air could get me the temperature I needed if I got a working geometry for the forge. Here's what I ended up with:

Additionally a more knowledgeable copper smelter from the other side of the Atlantic Ocean, gave me some good advice about how to test for what was going wrong. (Thank you Fergus!) Armed with this information, and general his encouragement, I took another shot.

On Wednesday, 16 Jun, 2010, I completed my first copper smelt. Here's a short (and very self-important) video of the results.

I plan to do another smelt tomorrow, on a slightly larger scale, so I'll take pictures and video, and post them.
Posted by Jeff Evarts at 2:25 AM No comments: 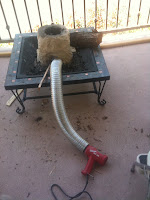 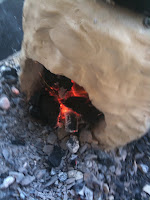 Well, I was ready for my vacation anyway :)
Posted by Jeff Evarts at 7:05 PM 2 comments: 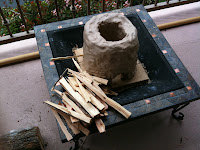 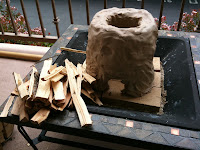 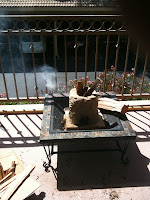 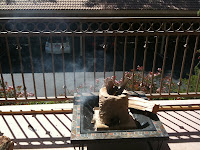 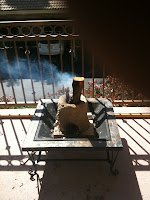 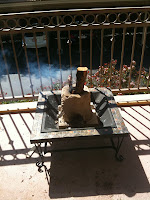 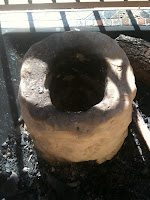 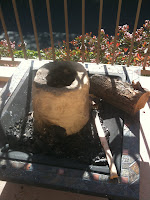 As you can see, the second firing went well. There was either a little spalling, or there wasn't any, and I just cleaved off some loose ash/clay when cleaning the coals, but either way, there are no cracks or major cleaves, so I'm ready to move on to the High Firing!
Posted by Jeff Evarts at 6:36 PM No comments:

Now based on several articles, videos, and some photos found online, I've decided to build what I think should be termed a clay stack furnace. I will create a small pocket of high temperature surrounded by reflective (or at least insulative) material. Thus the heat energy will stay trapped in that area, rather than leaving via the flue/chimney.

Shopping for high-cone clay turned out to be the hardest part. I knew I was going to be pushing all sorts of temperature boundaries in the pocket, so I didn't want to mess with something that would melt, slag, or droop below that. Unfortunately, my local bigbox stores, craft stores, and even school supply stores didn't carry anything beyond air- or oven- dry clay. I went to a couple of the boutique paint-your-own pottery places, and although they sometimes sell clay, they had none. Even the specialist art supply place on the edge of town only occasionally carried pottery clay, and that was neither high-cone nor in stock.

In fact the nearest place that was open and selling cone-10 clay was the student store at a college about an hour's drive out of town. Happily, they were dumping their stock at the end of the semester, and had 35-40 kilos at "sub cost" prices. Whee!

OK, so now I have clay, but I'm no potter, so I have no idea what I'm doing as far as construction, drying time, firing time/temp, etc. A quick browse through the internet does not reveal much in the way of "how long do you let a 5cm thick wall of clay dry before you fire it?". Most of the instructions are for dainty little teacups or objets d'art. The five large cubes of clay made me bold, and I decided to just forge ahead. (No pun intended)


Basically I started with a tight little horseshoe shape, built on that, then closed the tuyere at the top, and built it up a bit taller.

When I was done, I realized that I had expanded the internal volume considerably beyond what I had originally intended, so I sliced (vertically) a couple of chunks out of the sides, dampened the edges, and stuck them back together firmly. While I fully expected this to result in faults during firing, this did not happen: apparently working the edges enough resulted in a good "weld". The removed clay I placed on top again, making the stack still taller.

Finally I wet my hands a bit, and smoothed and compressed all the surfaces. Yes, smooth is a relative term, but I reasoned that reducing the surface area would increase heat reflection and decrease heat absorption. Likewise, the opportunity to compress the sides together would hopefully knead out any larger air pockets. This was by far the quickest part of the build.

So now I have this... er... thing. I know it's got a lot of water content: I didn't add water to the clay out of the box, but it was still pliable, so its water content was not zero, and I did wet my hands for the smoothing effort, and the clay drank that water in.

Looking up drying times on the web, I get a variety of answers: from 36 hours in Arizona to ten days in Minnesota. Since I'm leaving on a trip in four days (on April 28) I decide to try for three days. Moving this (base + forge) off my patio and into the relative dry of my apartment was a big job, and bringing it out again was going to be another one. Happily, family and friends were understanding enough to help.
Posted by Jeff Evarts at 6:11 PM No comments: 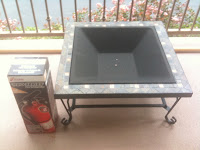 Onwards!
Posted by Jeff Evarts at 5:21 PM No comments: